ON ABC TONIGHT: A Family Farm in the Midst of Suburbia

Posted on May 15, 2008 Categories: Highlights No comments yet

Is it neat, or is it slightly odd that in this Los Angeles community — it’s called Pasadena — a suburban mix of nice restaurants and well-tended front lawns, there is a home wedged in with the other houses where the entire front yard is edible? 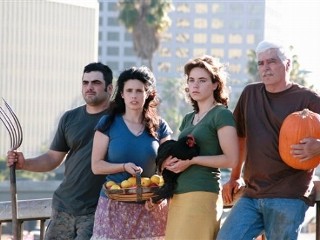 From homemade fuel to outdoor baths, the Dervaes family takes recycling to the next level. ( Photo: Courtesy Chris Kelly)

It’s true. At 631 Cypress Avenue, there is not one thing that cannot be eaten. Nothing. Kale, chives, pepper, pinapple, guava, Swiss chard, even edible flowers along the side of the house, and into the back yard.

It is Jules Dervaes’ fifth of an acre. His little family farm, in the midst of American suburbia, his way of breaking free without really going anywhere.

“We eat rich, I’m telling you,” said Dervaes. “And the way we live, it just seems like something you would dream of.”

The “we” he speaks of are his kids, who grew up on the farm. Three out of four of them have stayed on into their 20’s and 30’s, and they don’t have other jobs either because what they don’t eat, they sell.